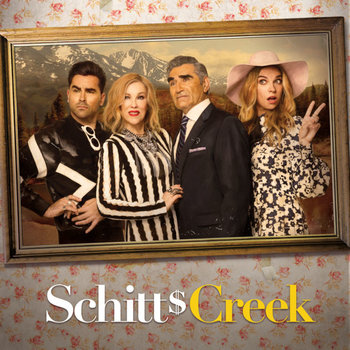 I'm sure they'll love it here. note From left to right: David, Moira, Johnny, and Alexis.
"I just thought, in spite of all the hardship, we found ourselves coming together, the kids, you and me, as a family."
— Johnny
Advertisement:

When the super-rich Rose family finds out that their business manager has bankrupted them, family patriarch Johnny Rose (Eugene Levy), his theatrical vamp of a wife Moira (Catherine O'Hara), socialite daughter Alexis (Annie Murphy) and effete hipster son David (Dan Levy) are kicked out of their mansion with nothing but the clothes on their backs.

But that's not entirely true: They quickly discover that they still own Schitt's Creek, a rural town that Johnny bought as a joke years ago and forgot about. The Roses are forced to live in the town's only motel and mingle with the townsfolk, like the obnoxious Mayor Roland Schitt (Chris Elliott), his surprisingly normal wife Jocelyn (Jennifer Robertson), sardonic motel clerk Stevie (Emily Hampshire) and air-headed waitress Twyla (Sarah Levy). Hilarity Ensues.

Despite the attention-grabbing name, the show is a pretty wholesome, charming Screwball Comedy. It has enjoyed progressively more popular and critical support over the seasons as the characters have developed, particularly with storylines that delve into their relationships, including Alexis's Will They or Won't They? romance with Ted (Dustin Milligan) and David's Queer Romance with Patrick (Noah Reid).

Ever since aired in the US on the Pop TV cable network (formerly the Prevue Channel/TV Guide Channel, the scrolling listings network) and became available to stream on Netflix, the show has seen major success.

The show ran for six seasons, with the final episode airing on April 7, 2020. That season went on to sweep the Emmys, setting a record for the most Emmy wins in a single season for a comedy series and becoming the first show to net its entire main cast an acting award in a single ceremony.

"Can't miss him." Patrick serenades his boyfriend David with an acoustic cover of Tina Turner's "Simply the Best".

"Can't miss him." Patrick serenades his boyfriend David with an acoustic cover of Tina Turner's "Simply the Best".