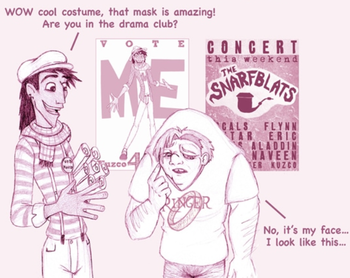 Drax: You, Quill, are my friend.
Quill: Thanks.
Drax: This dumb tree, he is my friend.
Groot: [grunts]
Drax: And this green whore; she, too—
Gamora: Oh, you must stop!
— Guardians of the Galaxy (2014)
Advertisement:

This character picks on the short girl for being short. They'll ask a woman for her age. They'll bug the flamboyant guy about his sexuality. And the worst part is, they don't realize what they're doing is rather painful for the person on the receiving end of the criticism. In the worst cases, they might not stop at one insult and even continue until someone forces them to stop, or the other person runs away crying. (Their reaction to this is probably: "Huh? What did I do?")

What separates them from the Jerkass is that this person is actually a good person — they're just clueless to things that people might generally be sensitive to. To them, it was just a fun joke or an honest assessment — no offense intended. When others bring up the fact that what they're saying is hurting other people's feelings, they apologize and try to change.

The Idiot Hero, Cloudcuckoolander, and those who have No Social Skills are prone to this. They tend to receive replies like "You Know I'm Black, Right?" and "I'm Standing Right Here". Innocent Bigot is a subtrope. Obviously guilty of frequently committing a Fee Fi Faux Pas. It may also be the result of a Crazy Cultural Comparison or a Cross Cultural Kerfuffle. Compare Horrible Judge of Character, Oblivious Mockery, My Parents Are Dead, Deadpan Snarker (when this is done intentionally) and Hanlon's Razor. Contrast More Insulting than Intended, where the insult was deliberate but not to such a degree.

Frustratingly Truth in Television. Especially notable are autistic people, though this can vary and often the exact opposite is true if said people are hypersensitive. Contrast with Apologises a Lot, when a character tries too hard to avoid being this — and it is not unheard of for the two to alternate.

Not Awkward at All

Not Awkward at All