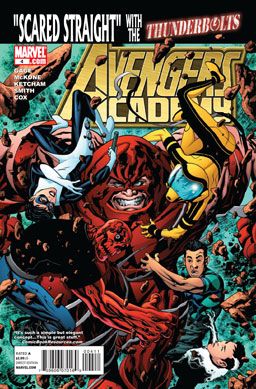 And you thought your PE teacher was a dick.
Advertisement:

Avengers Academy is a spinoff of Marvel's highly popular Avengers franchise. Avengers Academy is exactly what it says on the tin, a school for young and up coming super humans. Started during the 'Heroic Age' it stood out from the other Avengers titles by featuring largely new characters (the students) and some less prominent existing characters (the staff). The first story arc features Hank Pym (Ant-Man, Giant Man and many more) starting up the school to teach the first class how to be heroes and how to live with their various physical and emotional scars. Starting in issue #21 a brand new story arc begins featuring most of the original students, joined by a number of existing Marvel teens, some joining the main cast, the others being in the background as part timers. The school was also moved to Los Angeles to the West Coast Avengers compound and several members of the staff changed.

Created by Christos Gage the series acts as a Spiritual Successor to the similarly themed, though quite different Avengers: The Initiative, also co-written by Gage. One of the students 'Reptil' coming from that series, Hank Pym and Tigra were also central figures in that book. Though that Pym was a Skrull. The presence of Hank, Jocasta and Quicksilver means it also continues some plot threads from Dark Reign-era Mighty Avengers.

While any issue can be picked up and enjoyed, especially new reader friendly issues are #1, #14.1 and #21.

The title lasted for 39 issues (August, 2010- January, 2013) and some of the cast appeared in the Darker and Edgier Avengers Arena series as part of the Marvel NOW! relaunch. Also see Young Avengers for another Avengers-affiliated young team.

Unrelated to the free-to-play mobile village simulator game with the same name.