The Kid with the Remote Control 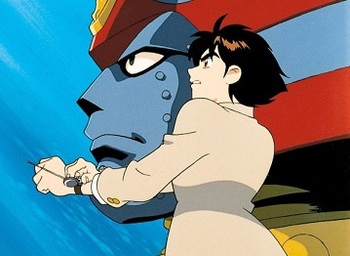 Bigger, but he's the follower!
"Wow, my own giant robot! I am now the luckiest kid in America! This must be the biggest discovery since, I don't know, television or something!"
— Hogarth, The Iron Giant
Advertisement:

A child — usually a young boy — who has sole control over some fearsome creature or robot and uses it wisely, despite advice from all the well-meaning but fundamentally clueless adults around him.

Sometimes the remote control is literal — as in the watch used in Giant Robo by Johnny Sokko/Daisaku Kusama to transmit orders to Giant Robo. Sometimes it is figurative or metaphorical, in the sense that the mecha or creature considers the child its sole master and obeys only him. Helping said creatures or raising them from birth are reliable ways to recruit the free-willed variants.

It can sometimes be difficult to tell whether the kid is his partner's sidekick or vice versa (especially if the partner is capable of human speech), but if they are main characters one is probably the Deuteragonist and the other the Protagonist. The trope originated in dawn-time Anime and Manga and is still strongest in those genres.

If the partner is an Anti-Hero or even Token Evil Teammate this trope becomes the Kid with the Leash.