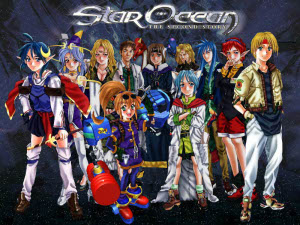 Star Ocean: The Second Story is the second game in the Star Ocean series. It was first released for the PlayStation, and unlike the first game, did get a Western release. An Updated Re-release for the PlayStation Portable, titled Star Ocean: Second Evolution, was released in early 2009. Claude C. Kenny, son of Ronyx from the first game, is a new ensign in the Pangalactic Federation struggling to remove himself from his famous father's shadow. His first mission, exploring Milokeenia, is directly under Admiral Ronyx's command. He activates a precursor teleporter and ends up stranded on the primitive planet of Expel, where he saves the other main character Rena Lanford from a rampaging monster. Hailed as a prophesied savior, Claude sets off on a quest to find out why things have gotten so bad on Expel recently. But there's more at stake here than one primitive planet....

There was a Game Boy Color sequel to The Second Story entitled Star Ocean: Blue Sphere, that was not released outside of Japan. This was remade for cell phones in 2009.

There was also an anime, called Star Ocean EX, which documented the adventures of the cast up until the end of the first half of the game. It was cancelled before it could go any further; the story was later completed with the second half released as a series of five drama CDs. There were quite a few changes to the plot, but the characters and overall structure remained the same. Most of the art direction changes were retained for the PSP version.