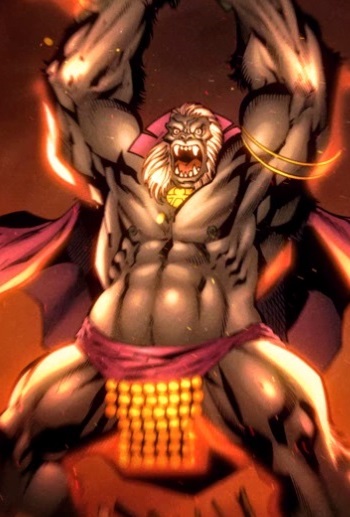 YOU WILL KNEEL BEFORE GRODD!
Advertisement:

Gorillas, orangutans, and sometimes chimpanzees: about the same size and shape as humans (normally), but tougher, hairier and meaner (maybe). Don't incite them to gorilla warfare, because the things they throw tend to hurt. They may also like to squeeze people or other animals to death. Or pick them up and bash them to the ground. Sometimes they will even try to eat people, despite real gorillas being primarily herbivorous (though they can also be portrayed as herbivorous, yet pretty nasty). They'll also often be shown towering over humans, something real-life apes would have a hard time doing (Average gorilla heights range anywhere between 4’7 to 5’11, but many can grow up to 6 feet or more, with the tallest recorded one being about 6’5).

In a nutshell, this trope is when gorillas and other great apes (excluding humans) are, contrary to their actual behaviour in real-life, treated as belligerent, pugnacious creatures. It's been a Discredited Trope since at least The '90s, a notable swerve being when Disney's adaptation of Tarzan changed the fictional Mangani of the original novels to gorillas to reflect how science has marched on. However, it still pops up in media from time to time, often with a Lampshade Hanging that the violent behavior is not normal for gorillas, or as a Subverted Trope where a gorilla first appears vicious, but then is revealed to be a Gentle Giant. When they pull this trope in such situation however, that overlaps with Beware the Nice Ones. Chimpanzees, meanwhile, are still subject to Maniac Monkeys, as they can be more dangerous than they appear—though since they tend to be smaller than gorillas, they're more likely to be portrayed as an Evil Genius than a Dumb Muscle.

This trope was especially common in the Poverty Row B movies of the 1940s - a cheap gorilla suit was the best monster a lot of these studios could afford, and a few prominent stuntmen (who brought their own gorilla suits from home) made entire careers out of roles like this - guys like Ray "Crash" Corrigan, George Barrows, and Steve Calvert. In the movies, the ape would typically be kept, Madwoman in the Attic-style, in a cage in the basement laboratory of a Mad Scientist's Old, Dark House. They would probably also develop a sexual interest in human women (which, ludicrously enough, was in line with a lot of the science of the day).

For the Good Counterpart to this trope, see Gentle Gorilla and, more generally, Silly Simian.