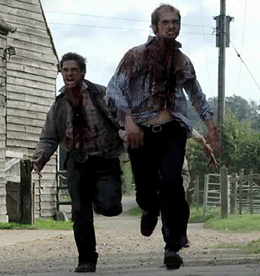 These guys? Not dead, just insane and very contagious.
"I know there are purist zombie guys that don't like the running zombies, but I dig the infected thing. I think that's a scarier incorporation of an element into the genre."
— Mark Pellegrino
Advertisement:

In quite a few modern Zombie Apocalypse series (and occasionally works about other things that also incorporate Everything's Deader with Zombies), the creator (obviously) wants to have zombies, but would rather not explicitly invoke the supernatural by having them be actual reanimated corpses.

This generally happens because it's somewhat more scientifically plausible — at least broadly speaking — that a plague turning infected people into crazed, flesh-rotten cannibals (or slow, lumbering cannibals) could exist in reality than that the dead could rise, so it gets past skeptics' Willing Suspension of Disbelief more easily. Or, as with many works featuring fast zombies, it may be used to justify why they don't act like the classic image of moaning, slowly shambling undead. Or perhaps the story simply takes place in a pre-existing setting that doesn't allow for supernatural zombies.

The virus responsible for zombification may be a mutated version of a real-life disease; rabies is popular because it already makes people and animals act, well, rabid, as is mad cow disease (and prion diseases as a whole) because one major avenue of transmission is by eating infected brain tissue. If the supernatural is involved rather than a virus, but the zombie is living anyway, it's often the result of possession by some nasty entity such as a demon or an Eldritch Abomination.

Since they are living people instead of animate corpses, these zombies are almost always easier to kill than the undead kind. They may disregard nonfatal (or not-immediately-fatal) wounds, but anything that would kill a human will kill them. It does run into a bit of a problem if you want a true Zombie Apocalypse, since just like rabid animals they should die of starvation and/or dehydration fairly quickly; even more so if they're zombies that refuse to attack other zombies, refuse to eat dead meat, and will only attack and consume live humans, and aren't shown to seek out water sources. By the time a few weeks have passed, the original zombie infectees should be dead (in the permanent sense) as a lack of resources cause their bodies to fail. This trope is not recommended if you want Earth to be covered in zombies for longer than a month.

This is a subtrope of Our Zombies Are Different. It tends to appear alongside Not Using the "Z" Word, but they aren't completely inseparable; zombies-in-all-but-name are often legitimately undead, and Technically Living Zombies are often simply called zombies. The combination of the two has been known to start arguments among zombie fans over whether they're really zombies or not. Which naturally overlooks the fact that the popular, Romero-esque zombies are very different from traditional zombies too, which were basically entranced slaves of voodoo priests, and often very much alive.

This trope overlaps with particularly extreme Hate Plagues, but only if the plague causes its victims to act mindless as well as homicidally insane. Usually are a type 3 on the Sliding Scale of Undead Regeneration. See also Mistaken for Undead. Contrast Ridiculously Alive Undead.

Forensic Files explains how a murder victim went silently shambling around his house half-dead with half a brain.

Forensic Files explains how a murder victim went silently shambling around his house half-dead with half a brain.