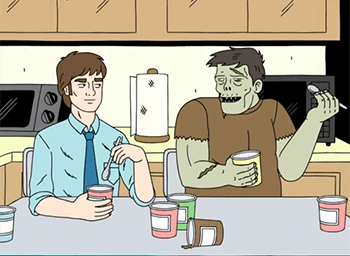 Why eat brains when you can eat ice cream with friends?
Gretchen: But you're a zombie.
Sawyer: Sure I'm a zombie, but I still got a heart.
— Camp Lakebottom
Advertisement:

While zombies come in all sorts and types, one thing they typically share in common is a hunger for human flesh. They can't be reasoned with and the only way to put a stop to these walking corpses is to put a hole in their head. But it turns out, not all zombies are like that. Sometimes a state of undeath has not been accompanied by Horror Hunger.

A specific form of Our Zombies Are Different. These zombies are typically intelligent enough to have rationality and emotions, remaining as Inhuman Humans, and often will have avoided experiencing a Loss of Identity that their more mindless cousins are subjected to. This in turn makes them capable of being benign and friendly. Though that isn't to say the more stereotypical mindless zombies can't be harmless in some cases.

Such instances are very likely to be an Attractive Zombie; after all, Beauty Equals Goodness and it would be a lot easier to make friends with something that didn't thoroughly repulse you.

If this is the result of a Zombie Infectee who succumbed to their condition then this is And Then John Was a Zombie. The inclusion of such a character in a cast may be an instance of Everything's Deader with Zombies.

May overlap with Revenant Zombie, though while these zombies are intelligent they are not necessarily benign. Furthermore, another distinction is that Revenant Zombies typically avoid the cliché of rotting and falling apart, while this is a very widespread occurrence for Friendly Zombies due to Rule of Funny.