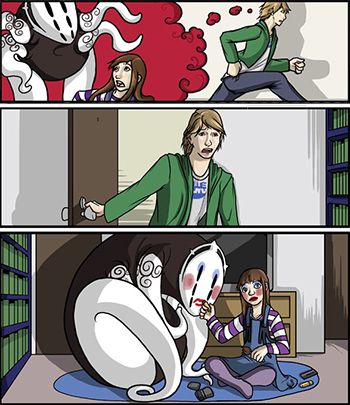 K: At any given time, there are approximately 15,000 aliens on the planet, most of them right here in Manhattan. And most of them are decent enough. They're just trying to earn a living.
J: Cab drivers?
K: Not as many as you'd think.
— Men in Black
Advertisement:

Not all space aliens in fiction are evil invaders who terrorize our fair planet with their high-tech war machines, and demand to be taken to our leader. Some of them are in fact quite nice. They're not looking for any trouble, and all they want is to be left alone, make a friend, return home or just get by in our strange and unfamiliar Earth culture.

The Innocent Aliens are like this. They've just arrived at our planet (though in some, rarer cases, we go to theirs, instead) and are total babes in the woods, displaying a very warped understanding of the humans' way of life. They're wide-eyed and childlike, and occasionally even need protection from hostile human beings, often trigger-happy military types who think they're up to no good and need to be exterminated for the common good.

In some kinds of stories, these aliens are used to prove that Humans Are the Real Monsters, especially if they or the rest of the interplanetary community live peaceful, enlightened lives and we humans are the ones who go around shooting things and generally being destructive. Even worse are settings where humans are monsters who want to capture such aliens to study them - against their wishes, naturally.

Often the "come in peace" part of We Come in Peace — Shoot to Kill. Contrast Aliens Are Bastards. If they're played for laughs, they may also be amusing aliens as well. It's possible that there are other aliens that aren't innocents in the setting, but the trope implies a whole population of aliens who are Always Lawful Good.

See also Did We Just Have Tea with Cthulhu? when an Eldritch Abomination is innocent and loving.