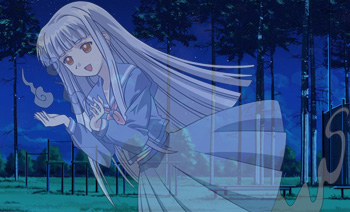 Turning "AAAAAAAAAAAAAAAAAAAAHHH!!!"s to "D'Awwwwwww!"s.
"Little ghost, little ghost
One I'm scared of the most
Can you scare me up a little bit of love?"
— The White Stripes, "Little Ghost"
Advertisement:

Simply put, the Cute Ghost Girl is a female member of the cast who just so happens to be a ghost after she met her demise. Despite this fact, they often look entirely like a normal person (except for the presence of Hitodama Light and Fog Feet), will act accordingly, and are treated more or less normally by the rest of the cast. The whole "they're dead" aspect is not considered a big deal by anyone, and once they are inducted into the cast the fact that they are a ghost will only come up on occasion. Oftentimes, it can be easy to forget that they're a ghost because they act so much like the rest of the cast... to the extent that the cute ghost girl herself is sometimes afraid of ghosts.

In some cases, the ghost girl will actually have some sort of artificial body that allows them to act even more like a normal human.

A subtype of Cute Monster Girl, and a Sister Trope to Attractive Zombie and Seductive Mummy. Often overlaps with Reluctant Monster, especially when they are first introduced. Invariably, a Friendly Ghost. If the Cute Ghost Girl is evil and trying to scare the crap out of/curse everybody, she's a Stringy-Haired Ghost Girl. Could be a Wight in a Wedding Dress. One of the three polar opposites to Ghastly Ghost.