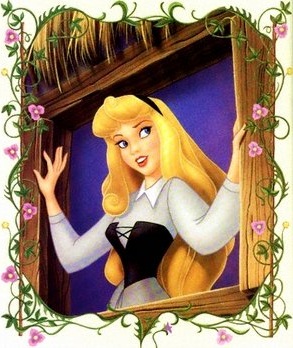 Lovely hair for a lovely princess like you, Aurora.
"Does not the very nature of things teach you that […] if a woman has long hair, it is her glory? For long hair is given to her as a covering."
— 1 Corinthians 11:14-15, The Bible
Advertisement:

Long hair tends to be among the Tertiary Sexual Characteristics used to establish a character as female.

Long, luscious hair is regarded as an archetypal feminine trait in quite a few cultures and commonly accompanies other such traits. One of the few exceptions seems to be the Barbarian Longhair, which has been a masculine trait at least since the Bible Times; and its descendants, the hippies and heavy metal rockers. Another, of course, is that some groups of people are largely incapable of growing long hair without much scalp work. It is important to note however, that what was considered "long" and "short" has changed over the course of history. At various times, styles which would be considered quite long by modern standards were deemed perfectly masculine: but the women of that period typically wore their hair even longer. Although there certainly were times and places where it was the style rather than the length which mattered, or when the question of long versus short hair was decided by factors other than gender. The styles we tend to think of as Rated M for Manly were actually a result of the invention of the barber shop, and thus the professionalization of men's hair care: which happened in Ancient Rome. Prior to that, "short hair" usually meant a bowl cut due to the simple fact that most people didn't want to risk putting a straight razor anywhere near their ears. Trope usually averted for Elves and/or Space Elves, the Proud Warrior Race (if they are more inspired by Mongols, Japanese or Native Americans than Romans), and Angels.

A Wholesome Crossdresser will often, but not always, have long hair either naturally or as a wig. A male-to-female Gender Bender will often involve Rapid Hair Growth because of this trope.

Glasses and Ponytail Coverup exploits this since glasses and hair up were typically portrayed as unfeminine.