Our Angels Are Different 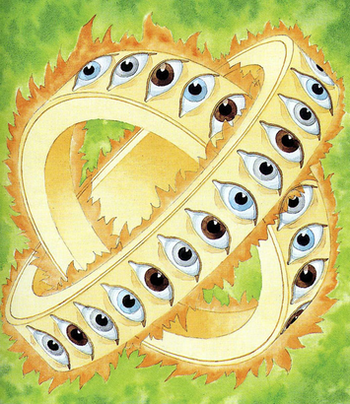 They sparkled like topaz, and all four looked alike. Each appeared to be made like a wheel intersecting a wheel ... Their rims were high and awesome, and all four rims were full of eyes all around. — Ezekiel 1:15
Dean: I thought angels were supposed to be guardians. Fluffy wings, halos — you know, Michael Landon. Not dicks.
Castiel: Read the Bible. Angels are warriors of God. I'm a soldier.
— Supernatural, "Are You There, God? It's Me, Dean Winchester"

Lots of works include angels, but not always the same kind of angels. Often, a creator will try to put a unique spin on his or her angels.

Angels in fiction tend, by default, to be of a vaguely Abrahamic nature and may or may not have big fluffy feathery wings or Holy Halos. They generally are found doing God's will as part of some sort of grand plan, helping mortals (sometimes incognito), or otherwise staying aligned with Good.

Angelic names, by the way, traditionally end in "-el" (meaning "of God"), such as in the Archangels Michael, Gabriel, Raphael, and Uriel.

The prospective angel has many options available for customization:

Sub Tropes include: Shinigami ("death angels"), Fallen Angel, Guardian Angel, Celestial Paragons and Archangels (the ones in charge), and Angelic Abomination. Not to be confused with Lovely Angels (which are just adventuresome women), or One-Winged Angel (which is a completely different trope). See also Winged Humanoid.

open/close all folders
Biblical Angels
Angels in The Bible can belong to several classes. The Bible doesn't mention an exact ranking for these classes; only the "archangel" class is mentioned as being higher than the others, with the other classes presumably being of the same rank but having different job descriptions. Note also that in the Old Testament, many Mysterious Stranger characters actually do not identify themselves as angels. They can be labeled angels only by oral tradition (a good clue is a plot-pivotal character whose origins are not stated, and who deflects any questions about his name). In Revelation, it says: And his tail drew the third part of the stars of heaven, and did cast them to the earth: and the dragon stood before the woman which was ready to be delivered, for to devour her child as soon as it was born. Revelation 12:4 The tail in this passage is talking about the tail of Satan as a cosmic dragon, and him drawing out 1/3 angels to rebel and fall with him. Notice the Bible calls them "stars", as in stars of space, the second heaven. The implication here is that angels are the stars of space themselves incarnate, which ties in why the Bible is against divination through horoscopes and astrology.

There is also a traditional celestial hierarchy of angels, which comes from an early Christian writing by one "Dionysius" (thus, the ranking and some of the angelic classes themselves are not found in The Bible). It divides angels into the following nine "Choirs" ordered from greatest to least, of which only the first and last two are commonly seen in art and literature:

The Hierarchy of Laguna

The Hierarchy of Laguna