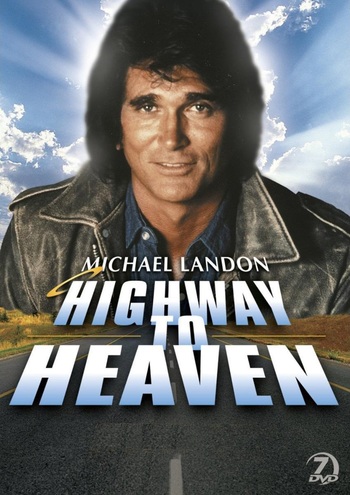 Highway to Heaven, spiritual predecessor to Touched by an Angel, ran from 1984 to 1989 on NBC, and told the story of a probationary angel named Jonathan (played by Michael Landon, who also created the series, was executive producer, and directed most of the episodes in addition to writing several of 'em) and his human companion, a bitter, retired ex-cop named Mark (played by Victor French). Unlike Landon's previous shows, Highway to Heaven takes place in a contemporary setting, as Jonathan and Mark travel the country as itinerant workers, receiving assignments from an entity known as "The Boss", whom only the angel Jonathan can hear, with their mission being to deliver love, understanding, and humility to those they encounter. Typical episodes stressed moral, Christian themes; though many episodes dealt with common human failings, such as egotism, bitterness and greed; some episodes addressed such topics as racism and cancer.