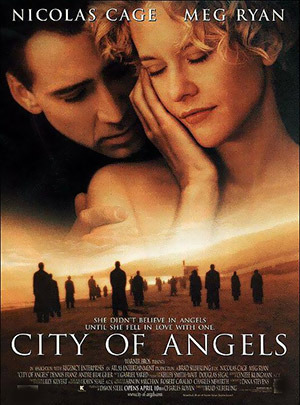 You're the closest to heaven that I'll ever be
And I don't want to go home right now
For other works of the same name, go here.
Advertisement:

City of Angels is a 1998 film starring Nicolas Cage (far from his Nicolas Rage roots), Meg Ryan, and Sarah McLachlan's music. It's actually a Foreign Remake of a classic German film, Wim Wenders' 1987 drama Wings of Desire. Cage plays an angel who falls in love with Meg Ryan's character, a doctor, and chooses to fall from grace and become human.