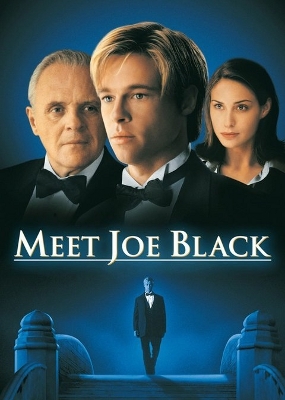 "Careful, Bill, you'll give yourself a heart attack and ruin my vacation."
— Joe Black
Advertisement:

Meet Joe Black is a 1998 American romantic fantasy film directed and produced by Martin Brest, and starring Brad Pitt, Anthony Hopkins, and Claire Forlani. It is loosely a remake of the 1934 film Death Takes a Holiday.

Death decides it's time to experience some life for himself, so he grabs the body of a young man (Pitt) who was hit by a car while crossing the street, and casually inserts himself into the life of a well-to-do businessman named Bill Parrish (Hopkins), who is scheduled to die on his 65th birthday (which is only a few short days away). Though initially - and understandably - reluctant to play host and tour guide to Death, Bill agrees not to tell anyone who "Joe" actually is on the condition that he leaves Bill's family alone at the end of their venture. Complications arise when it turns out the young man whose body Death took was flirting with Bill's daughter Susan (Forlani) only a few minutes before he died, and she and Joe begin to develop feelings for one another.