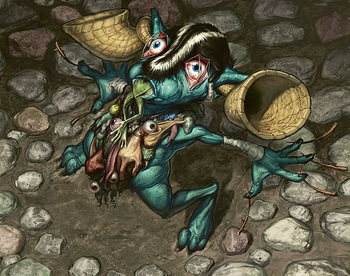 Humans being the kinds of creatures we are, we tend to take a lot of things for granted. Eating, for example. As a basic biological process, it gets old fast. We never really give it any thought unless we happen upon a particularly good meal.

This isn't true for entities who have, for whatever reason, assumed human form. Everything we take for granted is brand new for them. In particular, whenever a nonhuman becomes humanlike, they go absolutely nuts about taste.

This often happens to nonhumans who can transform, and who only rarely choose a humanlike form just to hang out with others. It's even more especially true for really alien Aliens with Bizarre Alien Senses, and even more so for creatures who don't even normally have a physical form. This and Sense Loss Sadness are two of the big reasons why Humanity Is Infectious.

Oddly, this sort of thing is almost guaranteed to be totally ignored if the alien in question assumes a physical form other than human. Given the Mysterious Animal Senses trope, that's actually pretty intriguing. (But then again...)

Compare Orgasmically Delicious, Hugh Mann, Showing Off the New Body, Limb-Sensation Fascination, and (ahem) Shapeshifting Squick... And speaking of Squick, see Man, I Feel Like a Woman or Breaking In Old Habits for a very specific version.