"Dumb people are always blissfully unaware of how dumb they really are." 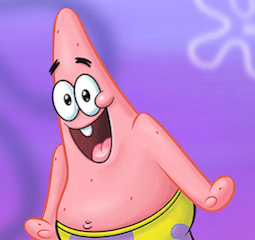 "Well, maybe it is stupid. But it's also dumb!"

A dimwitted pink starfish who is SpongeBob's best friend for life. He is normally unemployed, but has held a variety of day jobs throughout the course of the series. Despite his goofy behavior, he can occasionally show hints of brilliance.