Second Place Is for Losers 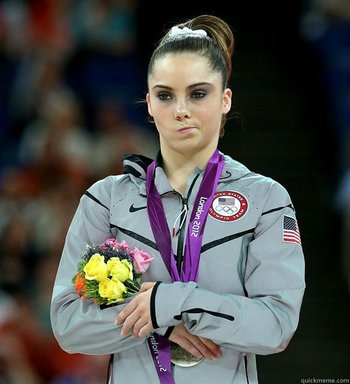 McKayla Maroney has won the Silver. And just look at how happy she is!
"Second place? That's a fancy word for losing!"
— Bender, Futurama
Advertisement:

You gotta face it: no matter how happy you are to be on that awards stand, first place is still better than second. But sometimes a person takes this a bit too far. When somebody starts acting like second place is for losers, it doesn't matter if you've won a footrace with everyone on the planet and bested 7,999,999,998 people. All that matters is you didn't beat the one.

Essentially it's being a Sore Loser, just, y'know, for those in the top rank.

Some real-life athletes feel that way quite deeply, coming so close and yet missing the mark. For example, one scientific study analyzed photographs of the facial expressions of many Olympians as they learned how they had placed. Gold of course was almost always ecstatic, and Bronze medalists were happy to have placed at all, but a Silver winner usually showed disappointment or dejection at coming in second best, unless it was their first time competing. This is especially true in tournament-style sports like basketball and hockey, where the bronze team had won their game, but the silver medalists lost the game for gold. And then the presentation ceremony takes place immediately upon conclusion of the last match, giving the runners-up no time to compose themselves and put on a sporting face.

In a narrative sense, this can be used to give An Aesop about sportsmanship, or at can be used to squeeze some extra angst from a character, especially if the second-placing character was hoping to use the competition to impress a "Well Done, Son!" Guy parent.

This trope is the prime reason Underdogs Never Lose.

Note this trope is only about characters getting second place, or at least placing highly enough to get a medal/trophy/etc., and then focusing on the fact that they still didn't win first. It's NOT about:

Compare Unsportsmanlike Gloating, The B Grade, Losing Is Worse Than Death. If it happens all the time, it can become a case of Always Second Best.

Contrast The Runner-Up Takes It All, Second Place Is for Winners. Compare and contrast Disqualification-Induced Victory. See also Medal of Dishonor and Damned by Faint Praise.

Not to be confused with Tough Act to Follow.

Bob Roth doesn't want to be #2

Bob Roth doesn't want to be #2