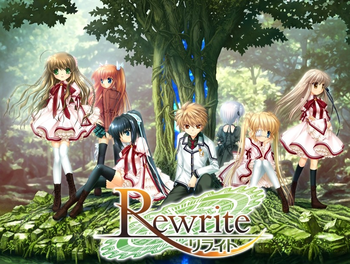 Kotarou Tennouji is a second-year high school student who lives a carefree lifestyle with his friend Kotori Kanbe. Deciding one day that he has been wasting his life and that he needs to seek out true friends and the meaning of existence he sets out to face everyday with such thoughts in mind. After experiencing some supernatural occurrences, he consults with the "school witch" Akane Senri who asks him to join the occult research society. He recruits some members, sets out on absurd quests, makes new friends in he process and generally works towards every day being fun. He goes on to discover some of the deepest secrets that Kazamatsuri city holds.

A Fan Disc Harvest Festa was also released with Alternate Universe or After story for each Heroine. One of the stories is a Dungeon Crawling RPG called Rewrite Quest.

A full translation was completed by Amaterasu translations. According to their website

In 2016, Key released an Updated Re-release called Rewrite+ that features various improvements and revisions to scenarios and adds new CG. It also includes the Harvest Festa. An English version of Rewrite+ was released by Sekai Project on December 17th 2021, albeit with Harvest Festa yet to be translated.

A 13-episode anime adaptation was produced by Studio 8Bit airing in Summer 2016. A second season aired in 2017, covering the Moon and Terra routes.

Don't read below if you don't want heavy spoilers.

Now has a character sheet; take character tropes over there, please.