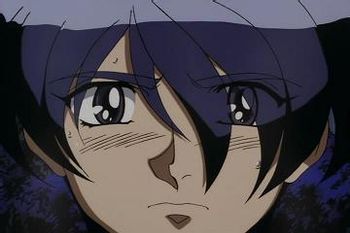 Hair is transparent in the world of Gaea, apparently.
Advertisement:

This is not strictly speaking wholly limited to anime and manga, but one of the most noticeable artistic conventions—after the big eyes and small mouth—is the fact that most characters' eyebrows are always visible, even when hair, a hat, or a bandage ought to cover them up. It's not quite as extreme as the American cartoon breakfast cereal spokesman Cap'n Crunch, whose eyebrows are on his hat, but sometimes it does approach that level.

This is a borderline example of Acceptable Breaks from Reality, since it would be very hard to animate a part of the face and not touch the others when you can put the entire facial expression on the front-most layer and edit away to save a lot of time. Of course, averting this trope simply means the artist is Doing It for the Art. However, this trope makes it easier to convey emotions.

Not to be confused with Unusual Eyebrows, which are oddly visible for other reasons.

Examples in which all facial features can be seen