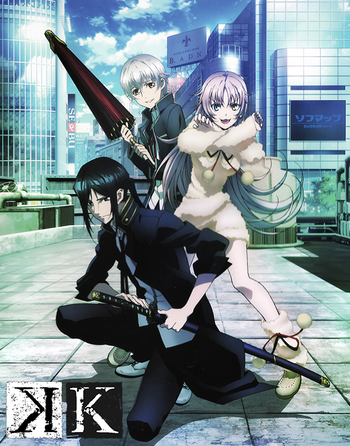 20 Minutes into the Future, following a slightly Alternate History, Japan has become a technologically advanced land and one of the world's most prosperous countries due to the power of the Kings. These seven individuals are chosen for their abilities to embody the natural forces of the world, and they have the ability to grant powers to their followers, who form their "clans". Two powerful sides - the Red Clan, HOMRA, and the Blue Clan, Scepter 4, have been at odds, and their conflict comes to a head due to the murder of Red Clansman Tatara Totsuka at the hands of a culprit claiming to be the Colorless King.
Advertisement:

Amidst all this, an energetic 17-year old student of Ashinaka High known as Yashiro Isana (or Shiro for short), finds himself chased by a bunch of shady guys, members of HOMRA. Just as he thinks he's saved by the timely intervention of a swordsman calling himself Kuroh Yatogami, he somehow ends up with Kuroh's sword pointed at his neck. And soon after, all display devices within the city begin to static - show a man who is unmistakably himself, identifying himself as the Colorless King and committing the murder.

Written by GoRA, a team consisting of seven Light Novel authors, K is an original Fall 2012 Anime that premiered on October 4, by Go Hands. The anime gained some notice by revealing almost no details about its plot, setting, or genre in promotional materials. It was quickly picked up by both Animax Asia and VIZ Media for simulcasting. A sequel

was announced when the last episode aired. In May 2013, the sequel was confirmed

A prequel manga, K: Memory of Red, centered on Homra, began serialization in Kodansha's Aria on May 2012. Another prequel manga, K - Stray Dog Story, centered on Kuroh before S1, began running in Kodansha's good! Afternoon on November 2012. Two Light Novels, called K Side:Blue and K Side:Red, were released in October and November 2012. These two were followed by K Side:Black & White, which was released in May 2013. Another prequel manga, K: Days of Blue began its run on Kodansha's Aria on October 2013. K: Countdown , an midquel manga between The Movie and the second season was released on December 2014 on Kodansha's Aria. The 2016 manga K: Dream Of Green is focused on the Green clan. Several more light novels have been announced.

Most noteworthy of the prequel light novels is Lost Small World, which follows Misaki Yata and Saruhiko Fushimi from when they first met in middle school, to when Fushimi leaves HOMRA and joins Scepter 4. The novel received a manga adaptation, and a stage play adaptation in July 2016.

The series has an official High School A.U., Gakuen K. A manga and a PlayStation Portable Otome Game set in this universe, called Gakuen K ~Wonderful School Days~ have been released. The game was ported to PlayStation Vita in December 2015. It features an original protagonist called Saya Konohana.

K Seven Stories is a series of six short films screen that screened in Japanese cinemas each month from July to December 2018. The first 5 films adapted various light novels and manga with the 6th film being an original story. Each film is also accompanied by shorts based on the Idol K parody manga.

K is licensed in North America by VIZ Media and the first season was aired on their Neon Alley site with an English dub. The movie and the second season have been simulcast, and were later dubbed. The series is available on Hulu

Not to be confused with K-On! or the main character of the NESTS story arc of The King of Fighters.