Everyone Went to School Together 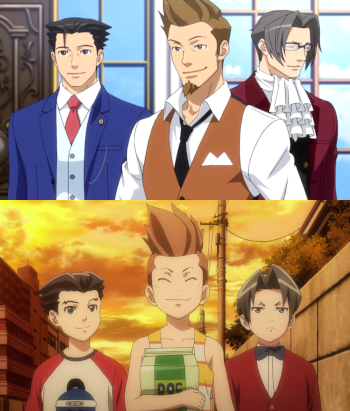 Dee: Wait, you went to high school with us?
The Waitress: Yeah, I sat right next to you in Trig.
Dee: Huh. Wow, you are very forgettable.
— It's Always Sunny in Philadelphia
Advertisement:

This is when the adult cast turn out to have known each other when they were younger. This may be revealed in a Flashback, a prequel, a childhood spinoff series, or just be mentioned in dialogue. Maybe they all went to the same high school—and were in the same class. (Bonus points if the school in question was an Elevator School.) Maybe they all happened to graduate from the academy at the same time. Very common in Small Towns.

Not only that, their personalities have gone completely unchanged since then. All married couples may be High-School Sweethearts, villains turn out to be the Schoolyard Bully All Grown Up. Because Writers Cannot Do Math, everybody turns out to belong to the same generation.

Usually a result of the creator wanting to tell a particular story set in the past with all the familiar faces present—even if those familiar characters have already met for the first time at the beginning of your original series. Can be used as a one-off flashback gag. Often involves a Retcon to set up a particular individual story or plot point. Can be a rich source of Fridge Logic, and is correspondingly likely to stretch your Suspension of Disbelief if executed poorly.

Related to One Degree of Separation. May overlap with Forgotten First Meeting, Childhood Friends, and School Forced Us Together. See also High School A.U..