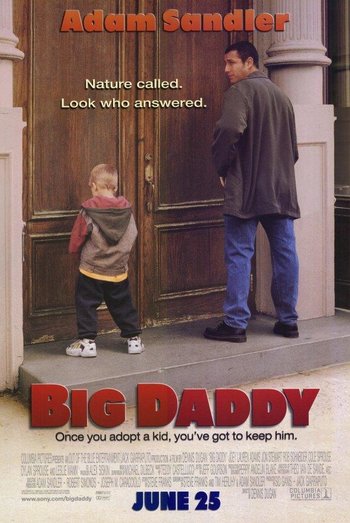 "Big Daddy is a film about a seriously disturbed slacker who adopts a 5-year-old and tutors him in cynicism, cruel practical jokes and antisocial behavior."
— Roger Ebert
Advertisement:

It tells the story of thirtysomething Manhattan resident Sonny Koufax (Sandler), a Syracuse law graduate who has no plan whatsoever of taking his bar exam. Instead, he lives off a fat settlement from getting his foot run over years ago and works as a toll-booth collector one day per week, spending the rest of his days sleeping and watching cartoons at the apartment he rents with fellow Syracuse alum Kevin Gerrity (Stewart).

His life changes forever one day when a young orphan named Julian (Cole and Dylan Sprouse) is literally left at his door. Sonny at first wants nothing to do with the kid, but then realizes that he just might be able to use him to impress his cantankerous father, Lenny (Joseph Bologna) — not to mention win back the affection of his disillusioned girlfriend, Vanessa.

As time goes on, Sonny and Julian strike up a friendship that eventually becomes so strong that Sonny decides to adopt the boy permanently. Problem is, social services representative Arthur Brooks (Josh Mostel) suspects that Sonny may have resorted to chicanery in order to gain custody of Julian, and decides to investigate...

This movie also features Joey Lauren Adams as Layla, a lawyer who helps Sonny; Leslie Mann as Corinne, Layla's sardonic sister; and Rob Schneider as Nazo, a delivery boy who often brings Sonny food. Steve Buscemi turns up in a cameo as a homeless person.

Not to be confused with that character in Cat on a Hot Tin Roof. Or the comedy band who does contemporary songs in the style of the '50s. Or with rapper Big Daddy Kane. Or with World Wrestling Entertainment's Big Daddy V — or, for that matter, with their "Big Daddy Cool." Or with the 1970s British wrestler. Or with those tough drill-arm enemies from BioShock. Or with that huge, 1,000-calorie burger offered by Southern California restaurant chain Cronies. Or the Chick Tract on evolution. Or with Hit Girl's father.