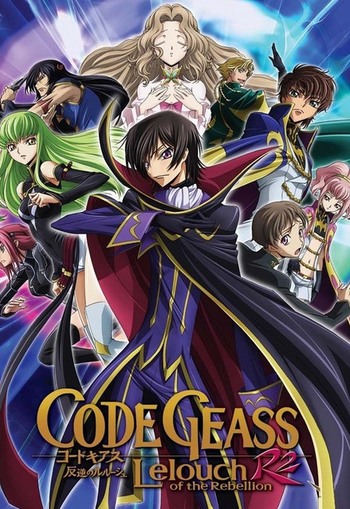 The cast of Code Geass R2—Lelouch in the center; clockwise from bottom left: Kallen, C.C., Xing-ke, Nunnally, Gino, Suzaku, Anya, Rolo.
"What do you do when there is an evil you cannot defeat by just means? Do you stain your hands with evil to destroy evil, or do you remain steadfastly just and righteous even if it means surrendering to evil? [...] In my case, I commit evil in order to destroy the greater evil!"
— Lelouch vi Britannia
Advertisement:

Code Geass: Lelouch of the Rebellion is a two-season anime television series that aired from 2006 to 2008; it takes place in an Alternate History timeline where the British Empire won the Revolutionary War, but lost a later European conflict against Napoleon (who went on to conquer the British Isles and forced the Empire into fleeing to America). The British-controlled America evolved into the Holy Britannian Empire, which eventually gained control of over a third of the world. Seven years before the beginning of the show's main story, Britannia launched an invasion of Japan to secure that country's stocks of a rare mineral that makes a new power source possible. Britannia's army of powerful Humongous Mecha—the "Knightmares"—ended the conflict in short order. After the victory, Britannia stripped Japan of its autonomy, its national identity, and even its name. The Empire refers to conquered countries by a numerical designation based on when it conquered the territory; in this case, Japan became "Area 11", and Britannians began referring to Japanese citizens as "Elevens".

In the present day, two childhood friends run into each other by chance after years of separation: Suzaku Kururugi and Lelouch Lamperouge. Suzaku is a career soldier of Japanese origin who hates bloodshed; having joined the ranks of the Britannian military, he hopes to gain enough authority to change the system from within and return a number of once-lost rights back to Area 11. Lelouch is an exiled Britannian prince in hiding; he wishes to crush Britannia from the outside to both avenge his assassinated mother and create a safe future for his disabled sister, but he has become disillusioned by the inability to act without reprisal from Britannia's police and military forces.

All of this changes when Lelouch encounters a Mysterious Waif called C.C. (pronounced as "See Two"), a refugee from a top-secret Britannian research project. She offers Lelouch a Faustian deal (which he accepts) that grants him "The Power Of The King", otherwise known as a "Geass". Lelouch's Geass manifests as a Magical Eye which allows him to issue a single absolute command to any individual—up to and including suicide—that the affected individual must follow to the best of their abilities.

Combined with his already-remarkable intelligence, the Geass gives Lelouch the chance to finally make his move against Britannia. He assumes the guise of a mysterious masked freedom fighter called "Zero", makes contact with a ragtag group of Japanese freedom fighters, and soon molds the group into his own personal army, which he calls "The Black Knights". In the meantime, Suzaku receives an amazing opportunity of his own: the Britannian Empire hand-picks him to become the test pilot of its newest Knightmare prototype, the Lancelot—and his decision to pilot that Knightmare puts Suzaku on a direct crash course with Lelouch as two friends, unaware of each other's identity, both fight in their own way to reform a corrupt empire.

Code Geass began airing in October 2006 and became a runaway success—it spawned a merchandising juggernaut and won numerous industry awards. As the brainchild of Goro Taniguchi and Ichiro Okouchi (responsible for the anime adaptation of Planetes), Geass brought their style and flair for the dramatic to the Real Robot Genre. The series also received a good bit of early word-of-mouth when CLAMP was announced as the show's character designers.

The show's second season, Code Geass R2, aired on Japanese television from April to September 2008. The reception to R2 was... varied. Critically, it was still well received, and won a number of awards. Some fans viewed certain scenes as distilled awesome or charmingly exaggerated, while others viewed them through a more cynical light; these clashes of opinion resulted in everyone creating tons of memes.

Bandai Entertainment originally licensed both seasons of Geass and the first three manga in America until its closure in 2012. The show also ran in its entirety on Adult Swim. Funimation rescued the license (and grabbed the license for Code Geass: Akito the Exiled, to boot) in 2013; it released the show on DVD and Blu-Ray on October 4, 2016. It is also up for streaming on their site with the first four episodes released on August 23, 2016.

For side stories, spin-offs, and various other adaptations related to this anime, see the Franchise page.

The Code Geass franchise contains examples of the following tropes:

Seven years ago, the Holy Britannian Empire launched an invasion of Japan to secure that country's stocks of a rare mineral that makes a new energy source possible. In a decisive battle, Britannia introduced their Humongous Mecha, Knightmare Frames, into combat that became instrumental in defeating the Japanese. Following the war, Japan became known by Britannia as Area 11, stripping the nation of its autonomy, its national identity, and even its name.

Example of:
War Was Beginning

Seven years ago, the Holy Britannian Empire launched an invasion of Japan to secure that country's stocks of a rare mineral that makes a new energy source possible. In a decisive battle, Britannia introduced their Humongous Mecha, Knightmare Frames, into combat that became instrumental in defeating the Japanese. Following the war, Japan became known by Britannia as Area 11, stripping the nation of its autonomy, its national identity, and even its name.