Sleeps in the Nude 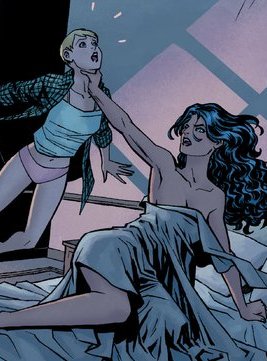 Just because you're unclothed doesn't mean you're not dangerous.
"What do I wear to bed? Chanel No. 5."
— Marilyn Monroe
Advertisement:

While pajamas or underwear are the most commonly depicted garments worn for sleep, it's also not uncommon to depict a person wearing nothing to bed at all.

Sometimes used to illustrate the setting, such as a depiction of a period before sleepwear became mainstream, or character, as in showing a person prefers not to wear clothes at home at all or has other traits to them that make sleepwear either unnecessary or in some way a hindrance.

Naturally, it also serves as a form of Fanservice, and sometimes a Modesty Bedsheet (or a woman lying on her front) can be employed if censorship is still necessary.

A lot of awkwardness may happen if a character sleeps this way have to share a bed but There Is Only One Bed. A Shameless Fanservice Girl or someone with No Sense of Personal Space may not mind, but the other person surely will. Expect a Bedmate Reveal if someone who sleeps naked sneaks into another character's bed, intentionally or accidentally, with one of them usually freaking out and jumping to conclusions.

When someone is woken up abruptly while in this state, it can also be an example of Naked People Are Funny or an Inconvenient Summons. Can sometimes lead to Dining in the Buff if someone chooses to get a Midnight Snack or make breakfast without getting dressed, or a Full-Frontal Assault if attacked in their sleep.

Cat scandalizes her roommates by sleeping in the nude in their shared dorm.

Cat scandalizes her roommates by sleeping in the nude in their shared dorm.