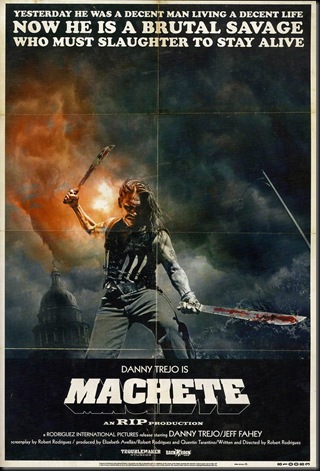 "They just fucked with the wrong Mexican."
Advertisement:

The story of Machete is an interesting one. It began when Robert Rodriguez first met Danny Trejo on the set of Desperado. He believed Trejo should have been a "Mexican Jean-Claude Van Damme or Charles Bronson" named Machete. Other projects got in the way, though, and Machete was put on the shelf. Rodriguez continued to use scenes he had planned for it in his other movies.

In 2007, Rodriguez filmed parts of Machete for a fake trailer attached to the beginning of Grindhouse. After making another children's film, he revisited Machete and set about making it into an actual film. The final product, released in 2010, includes every scene from the fake trailer, and gained massive popularity as the quintessential exploitation action flick parody of the '00s. It boasts an impressive cast, including Danny Trejo, Steven Seagal, Robert De Niro, Cheech Marin, Jessica Alba, Lindsay Lohan, Michelle Rodriguez, and more.

Machete stars Danny Trejo as Machete, a mysterious Badass Mexican hired off the street to kill a Texas state senator. However, before he can complete the mission, he is betrayed and left for dead by the same men who hired him. Now, eager for revenge, Machete sets out to take down the senator and everyone else who gets in his way.

A third film, Machete Kills Again... In Space!, is in the works.

They just fucked with the wrong troper!

"Mexploitation film" in which a Mexican day laborer named Machete, played by Danny Trejo, becomes a hitman; also directed by Rodriguez. It would later be adapted into a real movie.

"Mexploitation film" in which a Mexican day laborer named Machete, played by Danny Trejo, becomes a hitman; also directed by Rodriguez. It would later be adapted into a real movie.