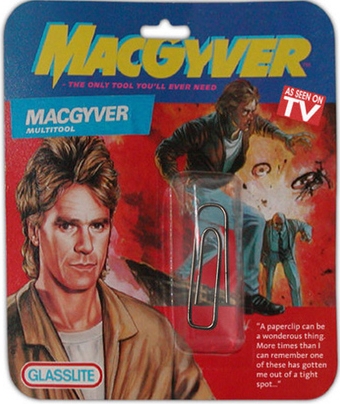 "With what?" Spencer asks. "Don't tell me you know how to make a bomb with a stick of chewing gum." Wow, the first ever MacGyver joke was actually in the first ever episode of MacGyver. That's actually kind of impressive.
—The Agony Booth recap

of the first ever episode of MacGyver

Describe MacGyvering Here, with just a match, an envelope, and three ounces of rubbing alcohol.

A character saves the day by making a gadget out of unlikely things, such as creating a bomb out of chewing gum, dental floss, duct tape, and a match. If he isn't already using the dictionary to provide the fuse, the character would realize he's a bricoleur and what he's doing is bricolage.

The characters that do this may be Technical Pacifists or Mr. Fixit. The Professor often seems to have the right tools on hand at the right time, as well. Even a Gadgeteer Genius can get into the act.

The Trope Namer and most famous practitioner of the art is Angus MacGyver, main character of the show that bore his surname, who would create said gadgets at least Once per Episode.

Note that the gadget has to be based on more science than simply, "Hey, I could kill someone with this random object." Look for those under Improvised Weapon. May involve Noodle Implements.

Compare Homemade Inventions, Bamboo Technology, and Duct Tape for Everything. When MacGyvering is exaggerated and used as a setting it's Scavenged Punk. See Locking MacGyver in the Store Cupboard for situations in which this is used to escape confinement. Merit Badges for Everything is when MacGyvering is institutionalized and parodied at the same time.