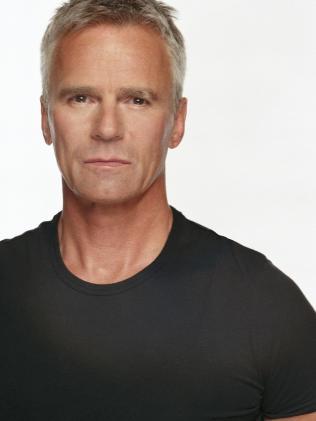 "You have to suspend disbelief a little bit to buy into your situation and to the story and to how the character will react. You have to tweak your credibility a little bit, is basically what it comes down to."
Advertisement:

(born January 23, 1950 in Minneapolis, Minnesota) is an American actor best known for two particularly geeky roles: originating the role of Gadgeteer Genius Angus MacGyver on the 1980s MacGyver series, and for playing Colonel, later General Jack O'Neill in the Stargate-verse TV series beginning with Stargate SG-1, which he also executive-produced.

Anderson was born and raised in Minnesota and had his first role from 1976-1981 as Dr. Jack Webber on General Hospital. He also composed the song "Eau d'Leo" in the MacGyver episode "The Negotiator".

He is a huge fan of The Simpsons and appeared As Himself in the episode "Kiss Kiss, Bang Bangalore".

Anderson entered into semi-retirement after leaving SG-1 as a regular, choosing to make sporadic appearances on that series and make the occasional guest appearance on other shows to be able to spend more time with his daughter. He quietly retired from acting around 2013, which is why the fandom rejoiced when he agreed to reprise the role of Jack O'Neill for a table read of new SG-1 scripts.