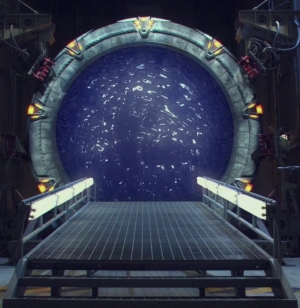 Earth's Stargate
"Stargate!
It's a crazy trip!
You can go quite far
and you don't need a car
Or even a ship!"
— The writers of Stargate SG-1, singing the theme tune
Advertisement:

To most of the Earth-bound humans in it, the Stargate-verse is indistinguishable from the universe in which we viewers live. It's present-day, there isn't a whole lot of Applied Phlebotinum that you'd notice, and human history has unfolded just the way you remember, so far as you know. About the only difference is that there's about 80 billion dollars in the US military budget that no one can adequately account for. Oh, wait...

In fact, human history unfolded in a radically different way than they teach you in school. First, the pyramids were built by extraterrestrials.

Many millions of years ago, aliens that looked exactly like humans evolved elsewhere in the universe, advanced to a stunning level, filled the galaxy with really nifty Imported Alien Phlebotinum (not the least of which were the titular Stargates), and created the human race before buggering off to a higher plane of existence. Some time later, a race of parasitic aliens called the Goa'uld invaded Earth, built pyramids, inspired the various mythological gods, and created a human diaspora in order to serve them as slaves on other worlds, resulting in large populations of Homo sapiens throughout the galaxy.

Really, the defining element of the Stargate verse is the Stargates: a Portal Network allowing instantaneous travel between the various worlds. Upon finding Earth's long-lost Stargate, the US Military promptly went out into the universe, and, mostly through pluck and determination, set out to completely rewrite the status quo, despite the fact that the rest of the galaxy is a lot more advanced.

Fortunately, we're really good at it. So, as of 2010, while to most of the people on Earth, it does not seem like anything interesting is going on, we actually have offworld colonies, two expeditions to distant galaxies, and five (intact) intergalactic starships (Daedalus, Apollo, Odyssey, George Hammond, and Sun-Tzu; two other starships, Prometheus (an older, intragalactic type) and Korolev, have been destroyed).

Works set in the Stargate verse include:

The Stargate 'verse is rare even in Science Fiction for having particularly cheap and easy interstellar (and later, intergalactic) travel.

The other defining element of the Stargate verse is that there are a lot of Godlike Aliens, representing a wide range of concepts of God, degrees of Godlikeness, and degrees of friendliness.

Another relatively unusual feature of the Verse is the scarcity of aliens: aliens do indeed exist, and the universe is teeming with life, but the entire population of the universe seems to consist of no more than two dozen or so distinct races, of which only three or four are ever central to the main plot at any given time.

Despite being one of the newer sci-fi franchises (compared to, y'know, the other franchises that start with "Star"), the Stargate verse is the third longest science fiction franchise in terms of hours. No single Trek series has more episodes than Stargate SG-1. It's a long way from either Doctor Who or the combined Star Trek franchise, but those have been around since The '60s, whereas the Stargate movie was released in 1994.

Tropes of the Stargate Verse as a whole include: