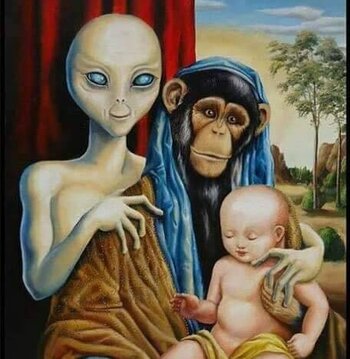 Morty: I didn't know that there were bugs out in space.
Rick: Well, what did you think, Morty? Life just developed on Earth by itself?
— Rick and Morty, "Look Who's Purging Now"
Advertisement:

Lots of people wonder about the origins of life on Earth. Were we placed here by a benevolent god? Did we arise out of a primeval soup of microbes? If the former is the case—well, why? And who? And how? And if it's the latter, how exactly did the vast chemical stew of hydrocarbons and proteins somehow get together and become self-replicating? And then how did those cute little squirmy germs grow and change and evolve enough to become, well, us?

Some stories attempt to answer these questions. But others decide to skirt this touchy ontological issue entirely, by bringing into it a different element: Outer space.

In other words, they propose that life on Earth is not of this earth.

Panspermia (get your mind out of the gutter) is a scientific idea which proposes that life on Earth came to it from outer space, as aliens. This is a real scientific hypothesis, mind you. It's considered very unlikely, but not so much so that supporting it necessarily makes you a crackpot. (That Other Wiki, of course, has plenty of information.

) This isn't the "Little Green Men"-style of alien, either. We're talking more along the lines of "cosmic pond scum hitching a ride in some water vapor in a comet." In fiction, panspermia (or exogenesis, which is similar but not identical) tends to gravitate toward the former, though—that aliens of some kind were actually the origin for life on Earth, or some other planet.

In fiction, this idea tends to pop up in one of two forms:

Frequently, this as used as part of a Reveal, and can lead to navel-gazing. Occasionally leads to Mars Needs Women, in cases of literal panspermia. See also Transplanted Humans, which is this trope in reverse (alien life coming from Earth); and Humanity Came From Space, which is only about the human species being extraterrestrial in origin. If a species exists on multiple planets without achieving spaceflight themselves and hasn't sufficiently differentiated it's Transplanted Aliens.

It may be worth noting that while this theory may offer an explanation for how life got its start on Earth (and/or other relevant planets), it ultimately does not in and of itself answer the question how life arose wherever and whenever it did so for the first time.

Due to its nature as part of The Reveal, examples for this trope are frequently full of spoilers. Be warned.