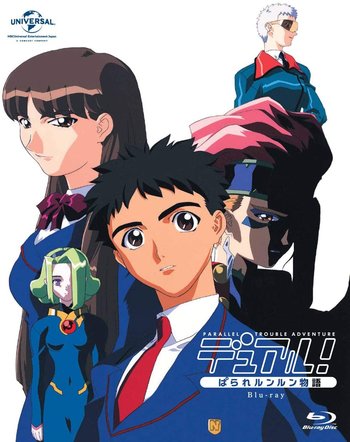 Dual! Parallel Trouble Adventure (originally called Dyuaru! Parare Runrun Monogatari in Japan) is a gentle parody of Humongous Mecha shows in general and of Neon Genesis Evangelion in particular. It was later added as being part of the Tenchi Muyo! OVA continuity.

Produced by the creative team behind Tenchi Muyo, Dual! is a fun romp — a Humongous Mecha show whose drama is thoroughly leavened with comedy born from its protagonist, an Ordinary High-School Student, and The Unwanted Harem he accumulates around himself.

Kazuki Yotsuga is a high school loner who feels isolated from his classmates because he has disturbingly realistic visions or hallucinations of giant robots battling throughout the city he lives in; it's great stuff to blog about, but ducking from invisible missiles makes people look at him funny. Then one day Mitsuki Sanada, the most popular girl in school, drags him home to meet her father, slightly-mad scientist Ken Sanada. The elder Sanada is a specialist in dimensional physics, and is convinced that when Kazuki has his visions, he is actually seeing events in a parallel world. A lab accident caused by Mitsuki ends up triggering Sanada's experimental dimensional transfer device, and the next thing he knows, Kazuki's not in Kansai any more, Toto...

Stuck in a world where he was never born, where giant robots battle in the streets and turn buildings into very real rubble, and where something called the Rara Army is busy trying to conquer the world one Tokyo neighborhood at a time, Kazuki is lost and confused. But he has an unexpected ability, and when Mitsuki Sanada once again comes to his rescue, this ability gives him a place within the UN forces fighting the invasion of the Rara robots.

Then his life starts getting complicated...