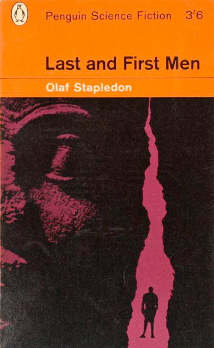 This book has two authors, one contemporary with its readers, the other an inhabitant of an age which they would call the distant future. The brain that conceives and writes these sentence lives in the time of Einstein. Yet I, the true inspirer of this book, I, who have begotten it upon that brain, I, who influence that primitive being's conception, inhabit an age, which, for Einstein, lies in the very remote future.

The actual writer thinks he is merely contriving a work of fiction. Though he seeks to tell a plausible story, he neither believes it himself, nor expects others to believe it. Yet the story is true. A being whom you would call a future man has seized the docile but scarcely adequate brain of your contemporary, and is trying to direct its familiar processes for an alien purpose. Thus a future epoch makes contact with your age. Listen patiently; for we who are the Last Men earnestly desire to communicate with you, who are members of the First Human Species. We can help you, and we need your help.
Advertisement:

Welcome to the future of mankind.

Written by Olaf Stapledon in 1930, this future history is one of the oldest examples of future histories, as it relates a story of over two billion years in which the protagonist is mankind in a quest across three planets and eighteen species for greater intelligence. Mankind rises and falls many times, and, although it falls to the very depths of nonsentience (each time progressively more savage), each height it rises to is greater than the last. In a curious choice, the reader's glimpse of the future becomes increasingly broad and vague as time progresses. This is especially true when one compares the whole chapters devoted to modern Man and his immediate descendants to the single-paragraph mentions of the distant ones.

Tropes which must be sketched out in sadly brief detail so that you may understand this article, though of course each absorbed the lives of many generations of men each as real as you and I, include: