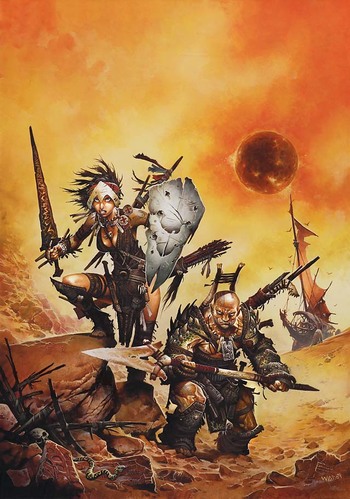 "The planet, Terminus, by itself cannot support a mechanized civilization. It lacks metals. You know that. It hasn't a trace of iron, copper, or aluminum in the surface rocks, and precious little of anything else."
— Salvor Hardin, Foundation Series
Advertisement:

Metals, especially iron and copper, are a critical part of a typical human civilization. A common setting in science fiction and fantasy is a world that is lacking in these materials. This lack can be used to drive the plot, or simply to provide an unusual background for the story.

This can be a reason for a Medieval Stasis or the driving force behind the development of Magitek or Organic Technology. Bamboo Technology is a possible (but uncommon) outcome. A dangerous Metal Muncher might be banished to such a planet where it can do no harm.

There is an element of Zeerust to this trope, as real world advances in materials science is increasingly demonstrating the ways in which elements like carbon and silicon can be used to produce both structural materials and electronic components with little or no iron, copper or other traditionally used metals. In particular, many works in the science fiction genre start with the assumption that virtually all future technology would be based on metals like iron, and that the lack of it would result in a technological collapse since nobody could conceive of using anything else. That said, so far as we can tell, developing the technologies needed to refine carbon and silicon into substitutes for metal would require metalworking to be developed first. A neolithic or medieval society on a planet with little or no metal would not realistically be able to advance to a modern level of technology, and as such would not be able to develop the ability to manufacture non-metallic technologies.