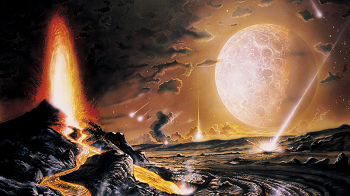 Never a dull moment around here.
"We've run into scorpions the size of battle tanks, three men died from Eyerot last week, I've sweated enough to fill a lake, my boots just got sucked into a sink-swamp and the trees are so thick in places, you can't squeeze between them. Emperor help me, I love this place! It's just like home!"
— Captain Rock of Catachan, Warhammer 40,000
Advertisement:

A Death World is a highly dangerous place, where simply going there is considered taking your life into your own hands. It could be from hazardous environmental conditions, such as an acidic swamp or poisonous fog, or from powerful native predators (Here there be Dragons, or worse, something that eats them), dangerous flora, or even all of the above. It's like the entire place is deliberately hostile to human life. (Of course, if it's also a Genius Loci, it just might be!)

Very few people would ever choose to live there, but since anyone who does is almost always a badass, expect any populated Death World to be a World of Badass by default. Sometimes, The Mentor may hide out here. Alternately, it may be Mordor, and/or home for an exceptionally tough and ferocious race. Some actually take advantage of this as a way of training their Super Soldiers on a planetary scale. Sure, half of the population might not survive through adolescence, but those who do should make good soldiers. Sometimes they are genetically engineered. Those who live on such a world may be an example of Had to Be Sharp.

In real life, every planet outside Earth that we know of to a reasonable degree, is dangerous, because we have yet to verify that any other planet out there can support human life. In fiction, Death worlds generally have relatively breathable atmospheres (for native life, at least), have compelling reasons for characters to get out and walk around, and have varieties of dangerous flora and fauna. A planet that cannot host life for any amount of time is just "uninhabitable", not this.

For more details, the various Video Game Settings actually do a decent job of describing the various kinds of dangers you might find in different ecosystems, as a result of Everything Trying to Kill You. The Dark World is often a magical variant. Don't be too surprised if there are More Predators Than Prey.

The Trope Namer is Harry Harrison's novel from 1960, Deathworld, in which the entire flora and fauna of a planet treat the human colonizers as enemies and do their best to kill them.

Compare to Gaia's Vengeance where a world can become like this as a response to some threat. For examples of entire Death Universes, see Crapsack World.

As seen in the Real Life section, this is Truth in Television.

Not to be confused with a Place Worse Than Death, which refers to Real Life locations with bad publicity.