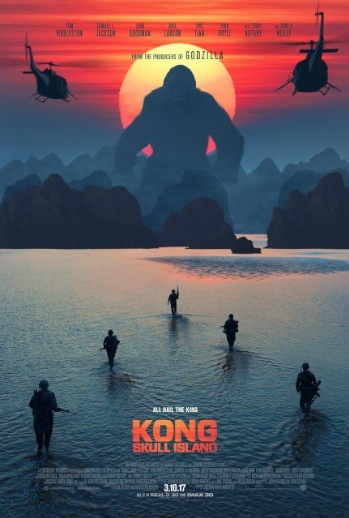 We don't belong here.
"Kong's a pretty good king. Keeps to himself, mostly. This is his home, we're just guests. But you don't go into someone's house and start dropping bombs, unless you're picking a fight."
— Hank Marlow
Advertisement:

Kong: Skull Island is a 2017 Kaiju Action Adventure movie by Legendary Pictures, written by Max Borenstein (who also wrote for Godzilla), and acting as an origin story to the Eighth Wonder of the World himself, King Kong, as well as his homeland, Skull Island. The movie is directed by Jordan Vogt-Roberts and stars Tom Hiddleston, Brie Larson, John Goodman, Samuel L. Jackson, John C. Reilly, Shea Whigham, Toby Kebbell and Corey Hawkins.

It is the year 1973, and the U.S. military's involvement in the Vietnam War is about to come to a close. At the same time however, unbeknownst to most people, a mythic, uncharted island in the Pacific known as "Skull Island" is found via satellite imagery. This catches the attention of scientist Bill Randa (Goodman) and his partner Houston Brooks (Hawkins) from the U.S. government agency Monarch, who take it upon themselves to arrange an expedition to the island as quickly as possible before the Russians catch on, planning to map out the island as well as chart and classify any new discoveries it might hold. For the job, Randa hires the former SAS Captain James Conrad (Hiddleston) to guide the expedition; a U.S. helicopter squadron, nicknamed "the Sky Devils", under the command of Lt. Colonel Preston Packard (Jackson) to work as a military escort and do all the grunt work; while the awarded "anti-war" photojournalist Mason Weaver (Larson) joins the expedition suspecting there is more to it than meets the eye. Upon arrival, the group discovers that their mission may be complicated by the rather dangerous wildlife which inhabits the island, most prominently a mighty behemoth ape, going by just the name of "Kong", who is at the very top of the island's food chain and doesn't take kindly to interlopers on his territory.

Initially a co-production with Universal (who own the rights to the King Kong character), the film was co-produced by Warner Bros. and is part of the MonsterVerse, a Kaiju-based Shared Universe with Legendary's Godzilla (with that film's Monarch organization serving as the link), with the two being set to meet in Godzilla vs. Kong in 2021.

A comic tie-in, Skull Island: The Birth of Kong has also been released. Set in the present day, it recalls a 1995 secret mission to Skull Island by Monarch agents headed by Brooks and San's son, Aaron, to uncover the secrets of Kong's past.

An animated series Spin-Off on Netflix entitled Skull Island is currently in the works.

Characterization tropes for Humans and Kaijus go on the Characters Sheet.

"We gotta get out of this place!"