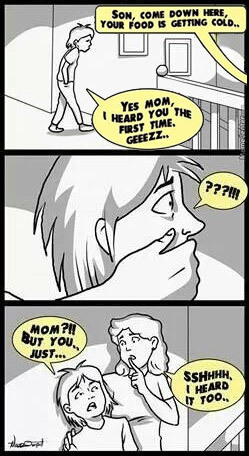 Robin: So how did you do Batman's voice?
Superman: [in Batman's voice] Precise muscle control. [in Robin's voice] Plus, I have a pretty good ear!
Robin: Don't. Do that. Again!
— Superman: The Animated Series, "Knight Time" (Video clip

So we've all seen a shapeshifter. And we all know that when a shapeshifter shifts themselves into another entity, they usually assume the voice of the entity they are copying. Meaning, a perfect imitation of another character's voice is a Required Secondary Power of anyone who would change their physical form.

It is important to realize that the Voice Changeling creates a perfect and flawless imitation — not one that is merely different from their own. So in other words, if Bob is annoyed with Alice, and decides to mimic her in his most obnoxious-sounding girl voice, that is not a Voice Changeling. If, however, Bob's imitation of Alice requires a voiceover from the actress who plays Alice, then the trope is in play. As a general rule, it is only a Voice Changeling if there is a momentary change in voice actors. That's the kind of ability we're talking about.

This ability can be a natural gift or an acquired talent. It can be gained through circumstance, magic or machines. But the important element is not to confuse this trope with Voices Are Mental. Therefore, if some magic turn of events causes a body switch, or if someone gets possessed, then this trope is not in effect, no matter how different the voices become. This trope strictly applies to a voluntary ability — Voluntary Shapeshifting, if you will — but only concerning the voice. It's that simple.

It's especially handy for a Master of Disguise that disguises him or herself in a conventional manner (i.e., not actually shapeshifting) and can accompany Latex Perfection really well (typically resulting in the use of Cast as a Mask).

Note: A character is only a Voice Changeling when they can imitate an actual voice/means of communication. Meaning, if some character can make non-human sounds that are not associated with a specific character, the trope is not in action. Only when their voice matches that of another character is this trope in effect.

Compare Voluntary Shape Shifting and Voices Are Mental. Not to be confused with Man of a Thousand Voices.