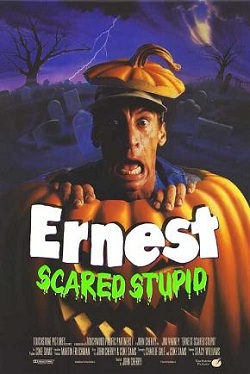 In 19th century Briarville, Missouri, Trantor the troll has been on a rampage, turning children into wooden dolls so that he can feast upon their energy. The townspeople lure the troll into a trap, chain him up and cast him into a pit, whereupon the village elder, Phineas Worrell, seals the troll beneath an oak tree, that it may never terrorize the children of Briarville again. Trantor swears to Phineas that he will rise again.

Fast-forward to the 1990s, where Phineas Worrell's descendant, Ernest, is a garbageman and friend to the neighborhood children, Kenny, Elizabeth and Joey. The kids are busy working on a haunted house for Halloween, until it gets destroyed by a couple of bullies. Ernest steps in to help them build a treehouse instead. And of course, which tree does he decide would be the best choice?

The film also features Eartha Kitt as Old Lady Hackmore, the creepy old witchy lady who lives near the tree.

No fuss, no muss, the trolls are dust, knowhutimean?