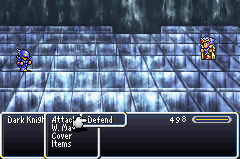 When the best offense is a good defense.
Jason: He's the most lethal video game creature ever! He towers above you with fists like anvils! Skulls litter the ground at his feet! And you're not supposed to even try to take this guy on in a fight??... Wow, talk about counter-intuitive.
Paige: Refresh my memory, you spend how many nanoseconds in the real world each day?
— FoxTrot
Advertisement:

Any type of confrontation where the hero's only way to win it is ... to stop trying to defeat their opponent; eventually the enemy will tire himself out (become bored, etc.) and the hero will achieve a victory for their pacifism.

The reasons behind this vary— sometimes the opponent is literally fueled by the hero's aggressive energy (or is a literal figment of the hero's imagination) so putting a stop to their hostility the enemy will literally weaken (and/or cease to exist). Maybe the opponent has an overdeveloped sense of honor and refuses to strike down someone who won't keep their weapon in hand. Or perhaps the confrontation was just a big misunderstanding (Poor Communication Kills, you know) and standing down will buy time for both sides to figure out that they shouldn't even be fighting each other in the first place. (Some Crossover stories are prone to this, with the heroes from each series somehow finding themselves in the others' crosshairs.) Overlaps with Kill Me Now, or Forever Stay Your Hand, where Luka confronts an aggressive Alice with nonaggression and hopes to win by getting her to stand down too.

Whatever the case, until the hero actually figures this out, they will feel presented with an opponent more formidable than any other; they may as well be fighting a mirror.

When this is applied to Video Games, it tends to mix elements of a Hopeless Boss Fight (because, more often than not, the opponent is made literally invincible to all attacks), a Waiting Puzzle and/or Hold the Line objective (because if the party dies, it's still Game Over). Hopefully the player will be given some hint that this is the goal (perhaps via advice from a Spirit Advisor) so that they don't have to expend their entire stock of healing magic/items trying to beat an impossible enemy. Also note that depending on whether the game proceeds in real-time or in turns, sometimes simply waiting is not enough, and the player needs to take some kind of non-hostile action (e.g. the Defend Command) to make time pass. (In fact, for some games this is the only time the Defend Command is of any practical use.)

Compare Puzzle Boss (where you're not necessarily fighting the boss, but still need to take action to defeat it, perhaps indirectly), Unexpectedly Realistic Gameplay, Victory by Endurance and Why Isn't It Attacking?. Contrast Violence Is the Only Option. See also Failure Gambit, where this path is the only way to prevent the gambit's success. Not to be confused with sheathing your weapon for tactical purposes. It may be a Secret Test of Character.

The team springs a trap that creates stone creatures which reform upon attack. Aerrow has them try a different approach.

The team springs a trap that creates stone creatures which reform upon attack. Aerrow has them try a different approach.