You may be looking for The Strange Case of Dr. Jekyll and Mr. Hyde or its stage musical adaptation Jekyll & Hyde. 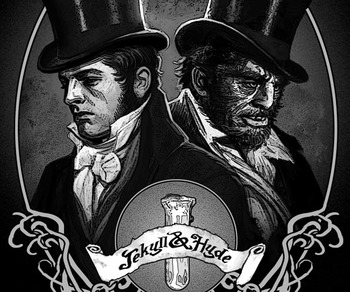 "I guess we're all two people. One daylight, and the one we keep in shadow."
— Bruce Wayne/Batman, Batman Forever
Advertisement:

When a character and his Evil Twin, Evil Counterpart, or Shadow Archetype are really the same guy after all. Or, sometimes, a completely different character is sharing body space with another. The point is, the villain lives inside the hero's body, and therefore hides in plain sight. The hero is trying to catch himself.

If the two personalities are aware of each other, this becomes a case of Gollum Made Me Do It. For a more mundane version, see Mood-Swinger. See In Vino Veritas if the change is alcohol-induced (you could call it "Dr Jekyll and Mr Jack Daniels"). As an evil “Hyde” personality's crimes are outside the good “Jekyll’s” control and the “Jekyll” is usually unable to stop the “Hyde” emerging, this is often a case of being Driven to Villainy.

Sometimes, though, the “Hyde” is not really evil; it may just be more instinctual or capable of using violence when necessary... See Wikipedia Behavior for the wiki version of this, also known as "Dr. Pedia and Mr. Trope". Also, a "Jekyll" persona isn't necessarily entirely "good" either — it may just be subtler or more self-controlled. After all, in the original story, Jekyll created Hyde as an outlet for his darker impulses, thus acknowledging that he had such impulses. Occasionally, the situation can be resolved (not necessarily favorably) with a Split-Personality Takeover, or with a Split-Personality Merge that reconciles both sides into a healthy whole. See also Superpowered Evil Side and Helpless Good Side.

The trope name comes, of course, from The Strange Case of Dr. Jekyll and Mr. Hyde, by Robert Louis Stevenson. The dual nature of Jekyll was actually originally a Twist Ending in the case of that story, but the book became famous and now it no longer surprises anyone. Most adaptations of the work focus on the dichotomy from the start. Other occurrences of the trope may still manage to surprise, if they’re well done.

(cabinet-making pillar of the church by day, burglar by night) is said to have inspired Stevenson, as did the story of Horace Wells

, a pioneer of medical anesthetics. While researching chloroform by testing various dosages on himself, Wells unknowingly built up a dangerous level of the drug in his system, and ultimately attacked two prostitutes with sulfuric acid in a state of intoxicated paranoia. He then committed suicide after sobering up and learning what he had done.

Since the fact that the hero and the villain are the same person could often be used as a twist ending, beware of spoilers on this page.

Count Dracula of Wallachia is soft-spoken while Alucard is... TheCrimsonFuckr.

Count Dracula of Wallachia is soft-spoken while Alucard is... TheCrimsonFuckr.