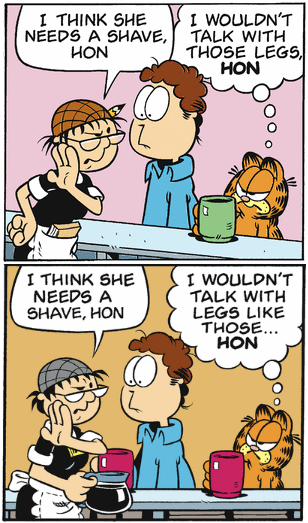 When two or more shows share the same pool of writers (or when a freelance scriptwriter is a particular combination of industrious and lazy), it's not unknown for tight deadlines to be handled by the expedient of taking a script already used by one show and "translating" it to another show. Characters are mapped onto their closest equivalents, and situations are revised slightly to fit the new program, but the same plot is used unchanged.

When properly and skillfully done, the result can be an episode that looks and feels "original". However, haste and carelessness can (and has) resulted in shows that not only have a "cookie cutter" feel, but that actually draw the viewer's mind to the similarity between the original and the retread.

Recycled scripts are also a common side-effect of writers' strikes, particularly among Westerns made in the 1950s and 1960s. The practice actually dates back as far as the early days of radio.

American networks have attempted to bring the ''Telenovela'' genre, very popular in Mexico, Central America and South America, to their market by purchasing the rights and scripts to older telenovelas, to very mixed to little success in the Americanization of them.

When a show has run for a very long time, they might find themselves inadvertently recycling their own scripts. This is often the result of changes in the writing staff, where the new writers can't possibly be expected to remember the plots of all 500 previous episodes. Particularly common in shows where every episode ends on An Aesop, since there are only so many important moral messages the audience will understand. This is particularly grating in a Very Special Episode.

A show targeted at a Fleeting Demographic or one that is a sufficiently Long Runner may well unabashedly recycle its own scripts every few years.

Fans of canceled series are sometimes irked by the refusal of writers to reveal what they had planned if the series had continued. Frequently, the reason is this trope. If a writer has a real humdinger of a story or a great idea for a plot twist and hasn't pulled it out of their bag of writing tricks before the series was canceled, the writer is not going to spoil it just to appease the fans. Instead, they will hold onto it for the next job and get paid for it.

Related to, but not to be confused with Strictly Formula, where each individual episode plot seems the same, with minor variations. See also Fleeting Demographic Rule, Recycled Premise, and Same Story, Different Names. Compare Yo Yo Plot Point, where a particular arc or plot point repeats itself, and The Remake, which is a movie that explicitly recycles the script of an older movie.