Series / On the Buses 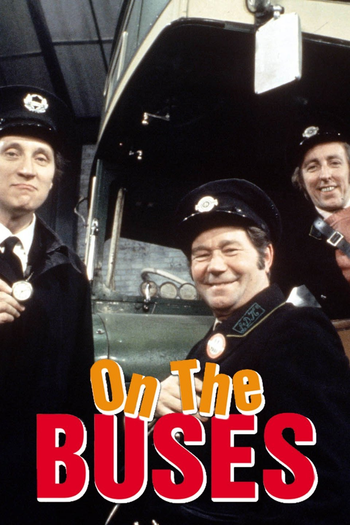 "No wonder you want me to take sleeping tablets, you're a sex maniac!"
Advertisement:

Seventies Britcom centred on workers of the Luxton & District Traction Company. The main characters are Stan Butler, a bus driver, and his best mate and conductor, Jack Harper. Their arch-nemesis is pen-pushing bureaucrat bus inspector Cyril "Blakey" Blake. Recurring characters include Stan's mum, sister Olive and brother-in-law Arthur. Olive and Arthur are unhappily married, which is often joked about. Seventy-four episodes were made from 1969 to 1973. Three spinoff films were also made.

On the Buses was one of the earliest British sitcoms to centre on working-class people's lives. Much of the humour comes from Stan and Jack's attempts at chatting up women, while trying to get out of doing any work. Critics derided the show as being vulgar, but it was hugely popular with audiences. Some episodes were watched by 16 million viewers, a figure unknown today, due to the splintering of the British televsion market.