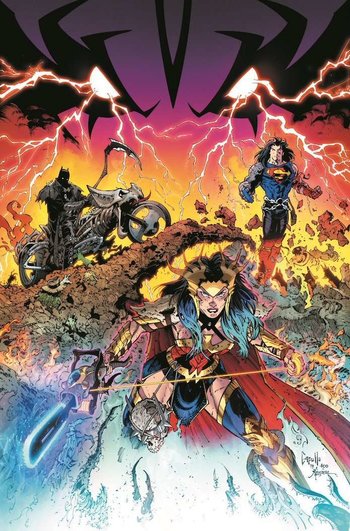 Ready for the Encore?!
Advertisement:

Dark Nights: Death Metal is a summer 2020 crossover event for DC Comics written by Scott Snyder and illustrated by Greg Capullo. Perpetua and The Batman Who Laughs have taken over the multiverse, ruling over everything with an iron fist. Now, the Trinity must reunite and overthrow her and her army of corrupted horrors.

The series is a sequel to Dark Nights: Metal and follows the events of Justice League (2018) and DC Year of the Villain, as well as incorporating the ramifications of Doomsday Clock, showing that Dr. Manhattan's essence has bonded to the fabric of the DC Multiverse, and thus is exploited by the Dark Knights.

When the event ended, it was followed by DC Future State, which showed a vision of a possible future created after the event. The DC Infinite Frontier initiative followed the event proper, with a full-scale relaunch of DC's titles.

", with their own (Death Metal) soundtrack and the voices of David Hasselhoff as Superman, Andy Biersack as Batman and Chelsea Wolfe as Wonder Woman.

The series has the following Tropes: