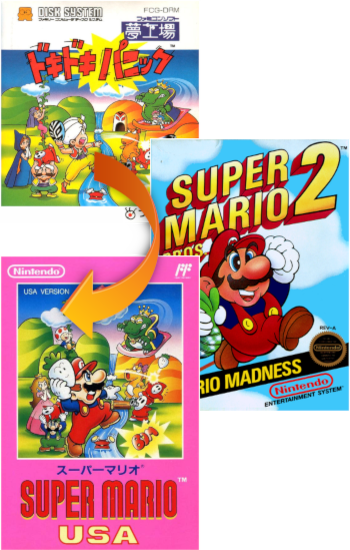 So you made this neat video game, right? But, hey, this game may be just too weird or just too Japanese, or you used a copyright license in a certain region you can't use in another, and apparently in order to sell it outside the region, you need to, um... change it. The plot, the main characters, or the soundtrack could all be candidates to be adjusted, possibly for the sake of a Dolled-Up Installment.

Sometimes this can lead to a very strange conclusion — the altered version of the product being marketed alongside or after the original version. Inevitably leads to arguments over which version is better.

Note that this is different from more standard imports in that it's the selling of an alternate-region version of a product that originated in the country of question. Also, selling a faithfully adapted alternate-language version does not really count — although a Macekre-ified version might. This trope applies best when the product is radically changed and yet the source material is obviously traceable.

Related to this trope is "reverse importing". Since American anime DVDs are far cheaper than Japanese ones, some Japanese anime fans choose to import American DVDs to save money. This eventually led to Bad Export for You.

See also Recursive Adaptation and Remade for the Export.