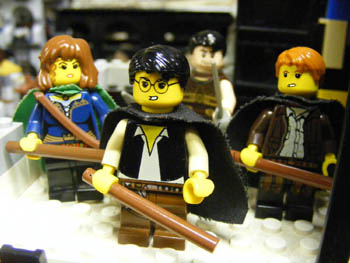 Dark Wizards beware.
"Don't expect this extra life to last very long, 'Tommy'. I mean really, I basically killed you with Expelliarmus. Oh, and before I could walk. And with my bare hands. As dark wizards go, you're kind of a pushover."
— Harry Potter, to a revived Voldemort
Advertisement:

, written and photographed by Travers "Swiftbow" and Rioux "Brogen" Jordan, is a chronicle of Harry Potter, following the epilogue of Deathly Hallows. It chronicles the adventures of Harry, his friends, and their children as "all is well" turns out to not be so accurate. Over the course of the next few years, they face dark wizards, dastardly deeds, and a Memory Charm-proof Muggle sheriff from Texas, among other things. Time and space are transcended, unlikely crossovers occur, and the Wizarding World is thrown upside down by a war greater than any before.

And, oh yeah, it's done with LEGO.