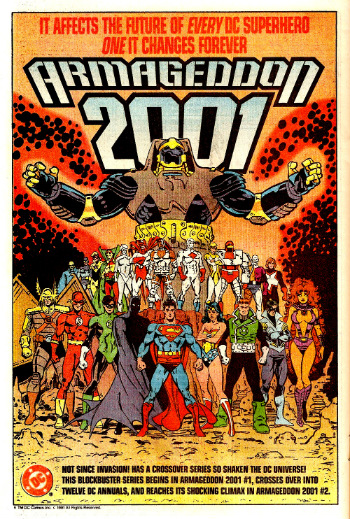 "Ten years from now a hero will fall. Sick of the eternal war with the evil, he or she will make the wrong decision— take the wrong road— and our whole planet will suffer.
2001... a bad year."
— Batman Annual #15
Advertisement:

A DC Comics limited series published in 1991. It was just two issues, but the bulk of it happened in the 1991 annuals.

Ten years in the future, one of the Earth's superheroes decides that the world needs order, does a Face–Heel Turn, kills all the others, and becomes an armor-clad dictator known as Monarch.

Years later, there is a man named Matthew Ryder who is unhappy with Monarch's regime. When Ryder discovers that Monarch is working on a time-travel experiment, he pretends to be loyal and volunteers for the experiment, which turns Ryder into the time-traveling hero Waverider.

The series was followed by Armageddon: The Alien Agenda and Armageddon: Inferno, the last of which brought the Justice Society of America back from limbo.

The exact reading order of this event is:

A live action adaptation of this storyline, titled Armageddon, featured as a crisis crossover storyline of season eight of The Flash.