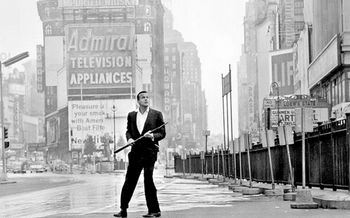 "Chemical bomb, chemical bomb
Eyes melt, skin explodes, everybody's dead
It won't be long, it won't be long
People gonna run around losing their heads
A river of blood, who's gonna live?
The earth is tired of human kind
And I think this world
Is gonna wash up in Hell"
— The Aquabats!, "Chemical Bomb"
Advertisement:

A plot device, such as a weapon (usually biological, chemical or nuclear) or a natural agent (like a plague/virus), which drastically reduces the human population in size while leaving a few charismatic survivors. Sometimes Only Fatal to Adults.

In order for a Cozy Catastrophe to remain cozy and small scale, it helps if said cozy catastrophe takes place After the End. It helps to justify the existence of a nearly-deserted but intact urban wasteland that, even if civilization DID collapse in the real world for any reason other than a Depopulation Bomb, would probably still be teeming with people only a few months after the fact. Sometimes major characters have a fortunate random immunity to the widespread plague or chemical/bio-weapon. The use of a biological or chemical weapon may be due to the Nuclear Weapons Taboo.

This is popular for several reasons, largely because it justifies other tropes:

Australia, due to its relatively high industrialization, isolated geography, and population of English-speaking Caucasians, is very likely to be the one nation that survives the cataclysm mostly intact, and become a new global superpower, at least in western media. Japan's proximity to the Asian mainland makes its survival dicier, but Japanese authors have this thing about their nation's invincibility, so look for it to be the fortunate land of survivors in anime and other homegrown media.

In films in this thread, expect outside shots to have lots of Low Angle Empty World Shots, night scenes (less people around) and early morning (Sunday morning, when most people sleep in) scenes. Expect the actors to have to rerecord their dialogue to take out the busy highway sounds in the background. These are all tricks film makers use to make a world look like it's been hit by a Depopulation Bomb, and movies achieve widely varying results with them.

It may be worth noting that while the Neutron Bomb provides inspiration for many such weapons, a neutron bomb is not a straightforward "It only kills people" bomb. It is a thermonuclear weapon, so this is mostly a simplistic comparison to other bombs with more straightforward purposes. That is, if you actually care about things like scientific accuracy.

Compare the much longer-term Sterility Plague.

open/close all folders
Anime & Manga
Comic Books
Fan Works
Films — Live-Action
Literature
Live-Action TV
Music
A spaceship from another star / They ask me where all the people are
What can I tell them?
I tell them I'm the only one.
There was a war, but I must have won.
Please take me with you.
Tabletop Games
Video Games
Visual Novels
Webcomics
Web Original
Real Life