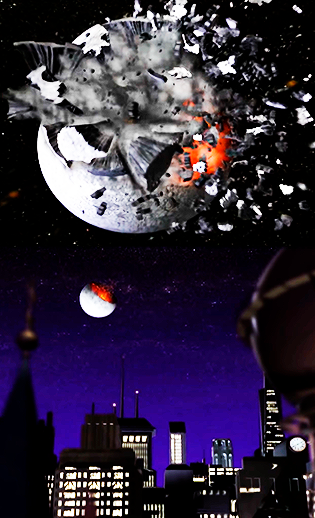 That's not a moon, that was a moon.
General: Mr. President, are you suggesting we blow up the Moon?
The President: ...Would you miss it?
— Austin Powers: The Spy Who Shagged Me
Advertisement:

It's bad enough when some bad guy tries to put his John Hancock on the Moon; things get really serious when it's destroyed. This happens in many continuities in many shows many times. Think of an Earth-Shattering Kaboom, only on the Moon.

A sister trope to Deface of the Moon. Compare with Grasp the Sun for a symbolic use of celestial bodies. Expect there to be No Endor Holocaust (unless rabbits live there). If the destruction of the moon does result in serious damage to Earth or nearby planets it may overlap with Colony Drop, especially if done on purpose. Complete destruction is optional: Sometimes it can turn the moon into a Shattered World instead, or make it crescent-shaped.

Something that is only occasionally referenced is that a satellite body does affect the surface of the parent object. Destroying or otherwise removing the Moon from its orbit would cause serious trouble.

To show that he isn't joking, Eggman blows a hole in the moon with the Eclipse Cannon.

To show that he isn't joking, Eggman blows a hole in the moon with the Eclipse Cannon.