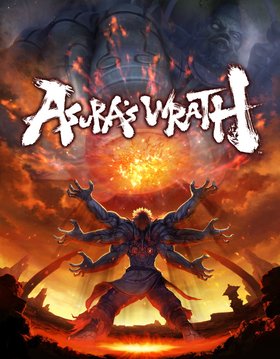 COME ON!Note This is the first boss, by the way.
"They took everything, but the fires of rage burn within.
They will feel his wrath. Rage never dies."
— Tagline
Advertisement:

In a story that draws heavily from Hindu Mythology and Buddhism, Asura is one of the eight Guardian Generals, demigods assigned to protect the world of Gaea and its inhabitants from the Gohma. After their latest victory, the other seven demigod generals kill his wife, kidnap his daughter, and frame him for murdering the emperor, all in an attempt to destroy the Gohma once and for all. When Asura confronts them, he is killed and cast down to Naraka. But a mere thing like death cannot keep a demigod like Asura down for long, and quite understandably, he is pissed. After spending several millennia climbing out of Naraka and emerging into a very changed mortal world, Asura sets out to rescue his daughter and get his revenge on his fellow Guardian Generals, who now call themselves the Seven Deities.

While very much a revenge story through and through, it explores a surprising variety of themes, ranging from familial love (particularly between father and daughter and brotherly love) to showing, ironically enough the true consequences of being an embodiment of unstoppable rage, just how far someone would have to go to save the world, and above all else, the consequences of a Martyrdom Culture worshiping some of the most horrific Jerkass Gods ever found in fictionland. This does not distract from the awesome visuals, spectacular fight scenes and just plain over-the-topness.

As per The Wiki Rule, it has a wiki right here.

Minna to Capcom All Stars.

Not to be confused with Asura Cryin' and definitely not with Asura.

open/close all folders
A-K
L-Z
Mithra: And that...was how my father lived.
Feedback