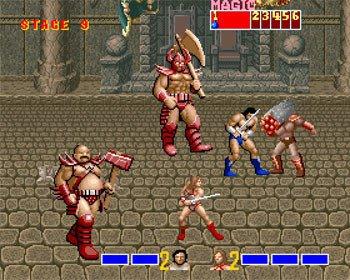 Sometimes it's more like Hack and Slash 'em Up.
Advertisement:

The "Beat 'em Up" genre is a cousin to the Fighting Game genre popular since the eighties, with their Trope Codifiers Double Dragon and Golden Axe. Most games that fall under this genre have very little in the way of story, and lots in the way of bash-the-other-guys'-heads-in-with-your-fists action. The Co-Op Multiplayer in these games used to be a highly popular feature.

These games eschew one-on-one duels for the protagonist (and a friend or two) rampaging across the map, handing out unmerciful beatdowns to every group of gangsters, mutants, robots and ninjas they meet, acquiring weapons from their environment and finding cooked chickens inexplicably hidden inside arcade cabinets. Many Beat 'em Ups include weapons and magical powers.

In Japan, Beat 'em Ups of the Double Dragon or Final Fight 2D variety are known as "belt-scroll" action games (ベルトスクロールアクションゲーム) due to their semi-isometric perspective and the fact that the characters are always facing left or right despite being able to move up and down as well. Games like Kung-Fu Master (which is completely side-scrolling) or Beat Down: Fists of Vengeance (which is in 3D) are not considered belt-scroll games.

Known as Beat 'em All in France (in English) and Russia, due to the various occurrences in side-/belt-scrolling games where the game won't scroll any further until all enemies are down.

A large number of "urban" themed beat 'em ups have the same basic plot - a female friend/lover/relative of one of the playable characters is kidnapped by a member of a criminal gang for some reason and the protagonist(s) have to travel through a number of areas of the city, beating the crap out of gang members and fighting a boss at the end of each area before kicking the ass of the gang leader and rescuing the girl.

3D Beat 'em Up games are better known as Stylish Action or Character Action Games. Also see Hack and Slash, which is more or less the exact same genre but with weapons; therefore, expect to see several overlapping examples.

Games in this genre include:

open/close all folders
#-L
M-Z
Licensed video games
For a time, it was common for licensed games to be made in this format. Some of the more famous ones include: