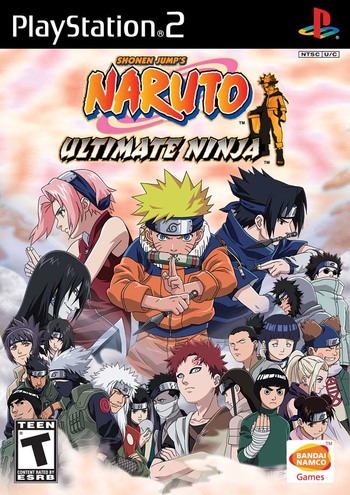 Naruto: Ultimate Ninja (Naruto: Narutimate Hero in Japan) is a Fighting Game developed by CyberConnect2 for the Naruto franchise exclusive to the PlayStation 2. It is the first installment of the long-running Ultimate Ninja series. It was released in 2003 in Japan and 2006 in the West.

The game is a mostly straightforward 2D fighter taking over the course of the beginning of the manga to the Destruction of the Hidden Leaf arc. The main mode of this installment is a Chronicles mode in which you take the helm of one of the playable characters and go through a series of battles loosely chronicling their contributions to the overarching story of the manga from their perspective. The other mode of importance is the Mission mode, where you can freely select a character and do a number of battles with certain criteria attached, ascending through the ranks to become the best.

Regarding that skipped number in the Heroes series, this is because the West received a watered down version of Heroes 2 before its official release called Naruto: Ultimate Ninja Heroes (Japan went straight to Heroes 2, which originally had no number).